Today I want to talk about trolling. What it is, why people do it, and how to counter it.

I highly recommend listening to this aural masterpiece in the background while you read to set the mood.


Trolling is the art of playing with the emotions of other people for personal gain. There are many variations of this definition, but that's pretty much the gist of it. Messing with people to anger them. 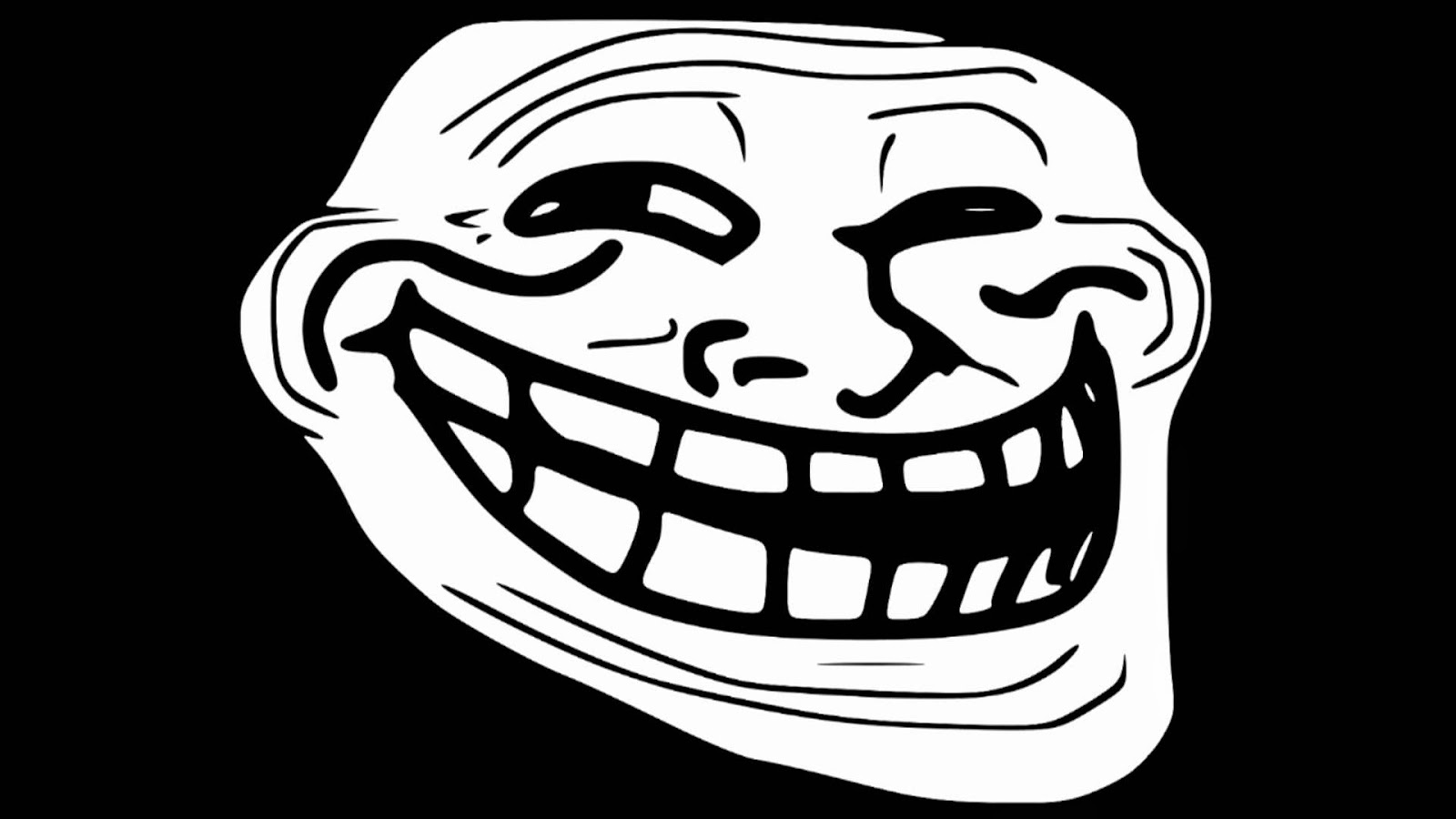 This is especially frustrating in games where teamwork is required. When playing a game, (most) players agree to enter into a magic circle and abide by the rules of the game world. This allows them to compete and have a good time. Trolls enter the same magic circle but will often ignore the rules on purpose to piss people off for their own personal glee.

If you wanted to categorize the troll into a type of player, you could use Richard Bartle's character theory chart: 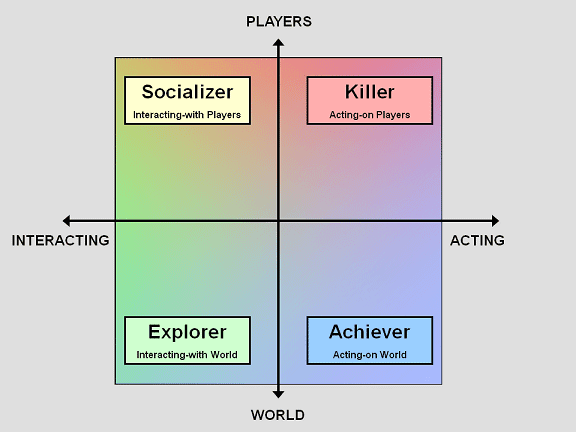 Bartle postulates that every player can be categorized into one of 4 roles based on how they play the game. Here's some working definitions copy/pasted from a great Gamasutra article:
You can open all kinds of worm cans and jump through all different forms of rabbit holes trying to categorize players, but let's keep it simple with these four for our purposes. Trolls fit into the killer type.


There are some killer types that live to show superiority over other players through superior play. These are not trolls. This is the basketball player playfully talking trash after a big play. This is the poker player that would rather bluff every hand and outplay his opponent instead of running the numbers and relying on statistics to win.


Trolls act against other players with the sole purpose of ruining their game experience. They win when other players get upset. Their trash talk is a lot scarier. The hate mail Jackie Robinson got from other players and "fans" is an extreme example of trolling. This type of garbage erases all fun from a game. This is what trolls do, in varying levels of severity.


So what makes a troll tick? Well, they want something.
Could be attention.
Could be the outrage and tears of other players.
Could be anything. Generally, it isn't what the other players in the game desire. 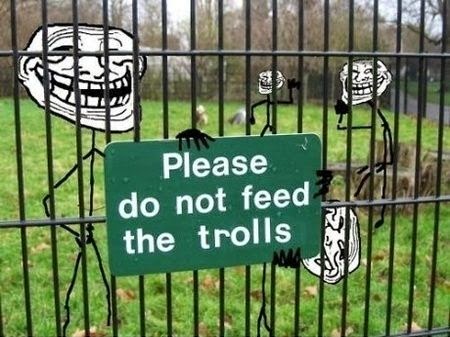 By understanding what the troll wants, we can tap into the best ways to stop them. Here are a few trolling examples I grabbed from youtube to show differences:


This is a satire guide made by a professional league of legends player making fun of popular shoutcasters as he plays his champion incorrectly and stops his team from doing anything useful. This was done for fame and internet glory, but backfired when the player was blacklisted from the professional gaming scene.

Here's another example from Minecraft where the troll digs an elaborate tunnel system under a house to steal other players' hard earned loot. He then shifts the blame on a friendly player for everything that happened. This troll is driven by the desire to piss other people off while outsmarting them.

Trolls come in all shapes and sizes, but become easier to understand once you can zero in on their motivation. When you figure out what their goal is, then you can figure out how to shut them down.


Here are some surefire ways to stop trolls in their tracks and even take advantage of them.

Tactic #1: Ignore them. This works 100% of the time and is the best way to make a troll impotent. Mute buttons and block buttons exist for a reason. Use them. If the troll can't get a reaction out of you, they will get bored, lose hope, and eventually stop. Think back to those two video examples. What % of the footage was composed of other people REACTING? Would they be funny if no one reacted? Would I even be using them as examples? I'm pretty sure no one would care or even give them the time of day. Ignoring a troll deprives them of the attention and reactions they crave, and takes away all of their power.


Tactic #2: Do the opposite of what the troll wants. This one is fun. Figure out the troll's game and give them the exact opposite of their goal. In that Minecraft game, maybe instead of being angry and freaking out they could have filled their chests with some pixelated crap and thanked the troll repeatedly for being a good garbage man. Similarly, maybe they set a bunch of traps in his tunnel system and laugh when he gets caught (Especially since this troll wanted to show how smart he was).

If they're looking for malice, give them compliments. Anger, give them jokes. Outrage, give them indifference. Nothing is more infuriating for a troll than to be proven ineffective. Just be careful and don't take it too seriously. At the end of the day there is a real person behind the troll, and they may be going through some serious crap. Never turn into a troll when dealing with one.


Tactic #3: Manipulate the troll to work for you. This one is my favorite. Here you essentially weaponize the troll for your own use. There are a couple of ways to do this, but you basically play along and bait the troll to do something you want.

For example, I wanted an example for this blog post, so I responded to a troll on twitter (normally I ignore these kind of jerks). Check out my conversation here. Now, I'll agree that I egged them on a little, but I wanted to showcase a few different characteristics of the common troll and only stopped once I got them.

Here's the start of it all. I'm interested in having a conversation and some random rudely jumps in and exclaims the opposite. Usually, I'd ignore something like this since his sentiment isn't very polite, but decided to engage for the sake of your enlightenment, dearest reader. :-)

I'm not sure if this is a real troll or not yet, so I check. I offer up some supporting evidence to my statement, and see what he does with it. Another account bumps in and then calls me a troll. At this point, I think I have a bite, so I play along.

I offer up hard evidence that what I say is true, and then do something important. I put the impetus on the two troll accounts to reveal who they are (their twitters have no identifying information tied to them) and ask for a conversation. Trolls lurk in the shadows, they have no power once they're pulled out into the light, so this is a fantastic tactic for taking away their leverage. In this case, the troll wanted to get people all riled up by saying the opposite of the original post. My focus was to play with that motivation and see if I could get them to troll me.

This is paraphrased a little, but pretty much the troll wouldn't reveal themselves, and kept trying to back pedal into their flawed argument that "the opposite of reality is true". They blabbered on for a while trying to bait me back into a meaningless argument. I didn't bite. 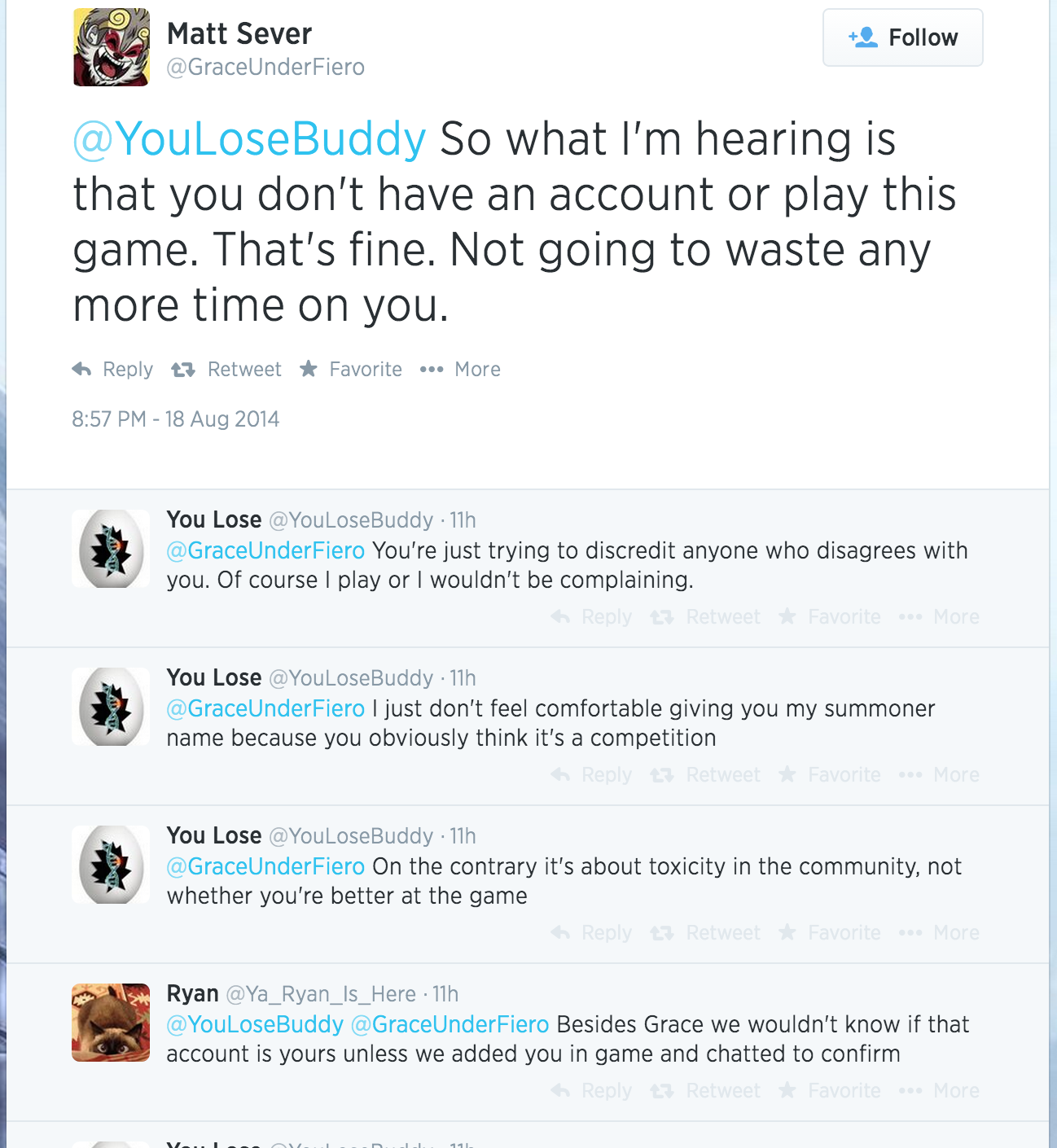 Here, I responded and said that I wasn't going to play their game anymore. At this point, I blocked both of these accounts from my twitter so I wouldn't have to see any more of their messages. The two accounts spammed more meaningless crap at me for a while after this and then gave up since I ignored them. Check and mate.

For some context, the two accounts are probably the same guy (they both responded simultaneously to everything), and they are probably a mean player that recently got banned from playing League of Legends for being a complete scumbag to others. @RiotLyte is the head behavioral design guy at Riot and has the impossibly fun job of making strangers play nice together on the internet. Lots of disgruntled trolls like to complain at him on twitter. Check out his team's work here and here if you're interested (I think it's pretty fascinating).

So in this example, the troll(s) were playing one game, I was playing another. By manipulating their motivation a little, I ended up getting what I wanted (a good personal troll example for this blog). If you can figure out how a troll works and what makes them tick, you can then use their motivation like a carrot on the end of a stick to make them play by your rules. This is what I call counter-trolling.

The next time you're being trolled, take a step back and evaluate the situation. Trolling is a system just like everything else, and if you understand the rules you can pull the strings and influence the outcome in a more favorable way. Figure out what they're after, then figure out the best way to deal with them. Take their goal off the table by ignoring them or providing the exact opposite. Or if you're feeling dangerous, see if you can have some fun and use that motivation against them. 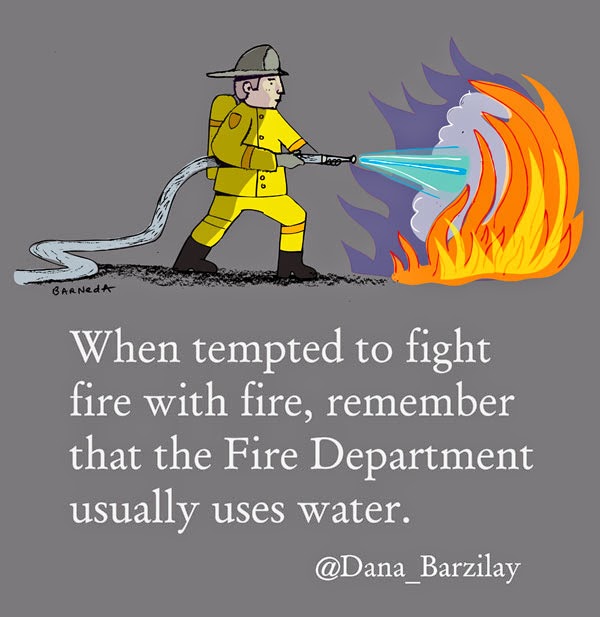 That said, always be aware that there is a real person behind the troll facade. They could be a complete psychopath stalking their next victim. They could also be a little kid that was bullied at school trying to re-inflate their self esteem. On the internet, you're never really sure who you're dealing with, so assume it's the little kid and treat them accordingly. I always prefer to think of people at their best, even when they're behaving at their worst.

So hopefully now you know the basics of trolling and how to deal with it. Good luck!

Wanted to thank @The_Mormonator for suggesting this week's post!
Posted by GraceUnderFiero at 11:10 AM